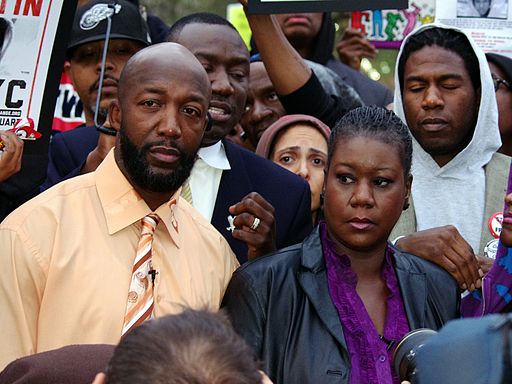 Social injustice versus Racial injustice? That’s the question that I keep trying to answer in my head. In fact, as more and more evidence, news, and views emerge about the Trayvon Martin case – I find myself with more questions each day.
Question 1. Is this a black and white issue?
Okay. So Trayvon’s momma views this as “right or wrong. not black or white.” So, I am looking at the tape and watching Al “freedom bus” Sharpton and I can’t see him being able to stay focused on just the social aspect, just the Trayvon aspect. If his own momma doesn’t want this to be a racial issue, should we? Or, is she saying that because she wants people to understand what it feels like to have your child be more prone to be seen as a problem no matter what?
Question 2. What are the politics in this case?

Similarly, politicians keep bringing up the Stand Your Ground Law in Florida as it relates to this case to make their point. However, Zimmerman wasn’t exercising that law – he noted self defense. So, why keep bringing up an irrelevant law? Or, is this law relevant in drawing the line between volunteer and vigilante?

Question 3. How come I got so mad?
How do we try to increase the value on black lives? I kind of went back and forth for a while myself – I think the racial injustice has come into play more so in the last 45 days rather than during the actual profiling and killing – I think Zimmerman would have taken out any kid 6 ft 3 wearing a dark hoodie in his gated community. For 3 minutes he was the neighborhood Superman. That could happen anywhere to anybody. Right? Now the sloppy way police showed Trayvon’s father a picture of his dead body after he submitted a missing person’s report or all the back and forth drama between Zimmerman and police over the past 46 days? I just don’t know…
Question 4. Now what?

I was quite happy with the hoodie movement. I think the goals of the hoodie movement, as it pertains to Trayvon, have been met. People around the globe put fire under officials and pressured them to take a second look at the case.

However, how do we take it to the next step without using Trayvon as the only example? The poster child that gets lost in protests and private and civic interest groups? This issue is greater than him. He is one of 29 black people that have been killed at the hand of police or security in 2012!! I live in Michigan, where 4 of the nation’s top ten violent cities are located. Vigilante justice is at a high. A store owner recently shot someone over knocking over a bag of potato chips, an elderly victim of a car-jacking had to crawl to the gas station and then transported by a passerby because the ambulance had taken so long… Now that we are starting to see justice unfold for Trayvon – how do we keep the conversation open to address some of these other issues?
Question 5. What do you think? What’s your opinion?
blackblack lives matterhoodiejusticepeacepoliceracial injusticetrayvon martin
Share:
Prev Next