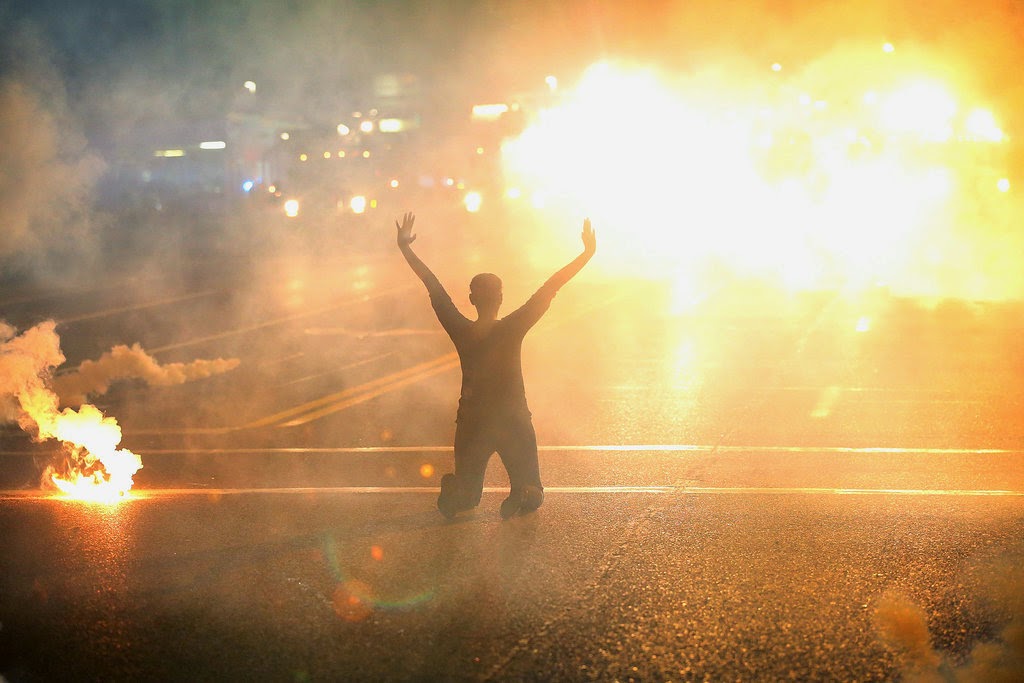 The last time I opened this blog up was to post a blog entry on inequality for Blog Action Day. I wanted to write about how inequality always adds this extra layer of crud on top of other issues. I wrote several examples from the past year or so in my journal. First I wrote about Ferguson, where the color of your thoughts is almost as important as the color of your skin. In particular, I remembered the photo below:
Then, I thought: everyone is talking about Ferguson. Maybe I will talk about Reyhaneh Jabbari. Ms. Jabbari seemed to just appear out of nowhere in the news and then disappeared just as quickly after her wrongful conviction and execution. The lack of worldwide outrage at her being convicted for defending herself against her rapist is almost as obscene as how quiet the media was about how she was executed. Her last words felt like lyrics composed for every mother that lost a child to injustice.
Post by Emergencies of the Heart.
Next, I journaled about inequality as it plays out at the intersection of gender and race, which is part of the reason I wrote the essay Roses Come in Black, Too. Then I started to think about all the instances of inequality, both on the micro and macro level that I am currently dealing with. I thought back to something a fellow panelist, Dr. Dwaine Campbell, said recently at a Stress Relief and Mental Wellness panel. He said that therapists often do not acknowledge the injustice prior to dealing with the problem at hand.
Two weeks ago exactly, on a Thursday morning that looked just like today, I woke up in the hospital after a bad panic attack…one that disguised itself in heart attack symptoms. I should have been upset and frustrated. But, I wasn’t. I haven’t been able to figure out why that was for the past two weeks. Last night I went to see Alice Walker for a Zora Neale Hurston lecture. During the Q & A, one of the participants asked Ms. Walker “what was one direct action we could take this week toward making peace with the world”. In my head, I wondered if she would talk about connecting with new people or reading more news from different sources. Instead, she offered just four simple words: “Make peace with yourself.”
Recently, I restarted my profile on Fitday.com. In the mood log, there are thermometers where you can adjust where you are on a continuum of extremes. For instance, you can decide if you are closer to being hungry or satisfied, happy or sad. But, one of the thermometers baffled me at first. The two extremes were “peaceful” or “angry”. I often felt like I am not at peace about a situation or on a particular day. But, never thought of the absence of peace as the presence of anger. So, I began thinking about each of the people or situations that I was not at peace with. In each instance, I found that there was something beneath the surface to which I was holding anger or resentment.
I think about those soldiers/police officers in Ferguson and I wonder if they are at peace with themselves. One of the top reasons cited for police misconduct and brutality are a difference in religion, race, and socioeconomic status…which often manifests itself in anger and indifference. I am curious to know if each member of the governing body that executed Reyhaneh Jabbari is at peace with themselves. Anger is cited as the 2nd most cited reason for rape. In this case, anger won by a landslide with gender inequality coming in second.
Until we take personal responsibility for our contribution towards equality, anger and intolerance will govern the streets.  Peace yields understanding, which is at the helm of equality. I cannot take anyone seriously that talks of peace, but not equality. But, as Ms. Walker so eloquently stated last night, “Peace takes Work.”
As I look back on that Thursday morning a couple weeks ago, I realize that I was mentally making notes in the hospital of what I could actually do, what I could not, what injustices had preceded my current circumstances, which things were of my own doing (or not doing). This assessment helped me make peace with myself unintentionally; it was the most empowering thing I could have done. Now, as I begin my Thursday, I understand what an increased benefit I am today to myself and the world by being at peace with myself.
Peace,
Leslie
alice walkerangerblogFergusonintoleranceJabbarijournalingpeacethursdayworld
Share:
Prev Next